A Rich History of the Maple Harvest

Archaeologists can encounter a lot of problems when looking at the archeology of maple sugar. Since archaeologists study material remains from human activity, logically there needs to be material remaining to study. Unfortunately, the seasonal and temporary nature of sugaring activities leaves often leaves little for archaeologists to analyze.

That is why archaeologists can find themselves categorizing a site based on what isn’t there instead of what is. For example let’s look at a site that was excavated in the 1960’s in Glencarry County which was dubbed a pre-historic Iroquoian sugar bush site. This wasn’t done because there was a wealth of information pointing towards the camp being used as such, but because of the lack of post-European contact trade materials, or really any materials for that matter. The absence of artifacts led the archaeologists to think that it was used seasonally instead of continuously. Also, large deposits of ash were thought to indicate the extensive use of hearths in the area.


Both Indigenous traditional knowledge and historical accounts attest to the existence of maple sap harvesting in the past. As there is no certainty about when and where it started, it can be said to have been done since time immemorial. The sap would have been collected in birch bark containers and then been processed into syrup or sugar by constant heating to evaporate the water in sap. Kettles and other technologies were adopted once they became more accessible through trade with European settlers.

This cultural exchange allowed for new innovations in processing to be developed, and these can be more easily identified in the archaeological record. In Michigan and Wisconsin, archaeologists have excavated the remains of ‘boiling arches’ at some indigenous sites from the early 20th century. These are ‘u’ shaped structures of stones packed with earth, with one open end to allow a fire tender entry into the fire box. These “arches” were an efficient replacement for kettles, as they permitted a more even distribution of a greater amount of heat (that was also better controlled), and for more steam to be allowed to escape during the boiling process. Instead of using a series of small kettles, people processed maple in a large rectangular metal pan held over the arch. This technology left behind a lot of archaeological evidence. This includes the unnatural arrangement of soil and stone, called the “borrow pit,” where the builders took the dirt they used to reinforce the arch, charcoal and ash deposits found near the opening of the arch from intermittent cleaning of the fire box, and various other materials, such as smoke stacks and support rods for the boiling box.

The history of the maple harvest is almost as rich as the delicious snacks we get from it. While we know that Indigenous people have always been central to this story, it can be difficult for archaeologists to identify cultural activities surrounding harvesting maple. To learn more about what archaeologist can say about prehistoric sugaring activities, visit the Museum of Ontario Archaeology’s temporary exhibit, “A Sweet Excavation”.

These are just some of the things you can explore at MOA.  Check out our secrets and visit www.londonsecrets.ca to learn more about other London museum secrets.

END_OF_DOCUMENT_TOKEN_TO_BE_REPLACED

A Look Back to the Lawson Site Pot

During the 1982 excavations on the Lawson Site, museum archaeologists discovered on of the more interesting deposits of pottery fragments yet encountered on the site. The pot sherds were interesting not only because we have been able to reconstruct them into a very large pot but especially because of the location of the fragments and what they were found with.

The pottery fragments were in the bottom of a large pit found inside the largest house yet uncovered on the site. This pit was located under the south bench row near the east end of the house. In shape, the pit was a flat-bottomed cylinder. During excavation, it was first though that this feature was a deep basin-shaped pit, but it was discovered to have a false bottom like a previous feature uncovered. END_OF_DOCUMENT_TOKEN_TO_BE_REPLACED

Hello Everyone! My name is Zsofia Agoston, and I am a third-year student at Western University majoring in Anthropology and Museum/Curatorial Studies. This year I have been working as a Curatorial Assistant doing an array of jobs including cataloguing archaeological donations, overlooking our archaeological inventory, and maintaining our gallery and exhibition spaces. Prior to this role, I volunteered at the MOA since September of 2016. END_OF_DOCUMENT_TOKEN_TO_BE_REPLACED 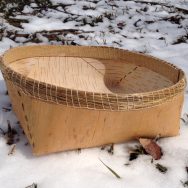 Here at MOA, we are taking the opportunity to highlight the life-ways and practices of the First People who were living here for millennia before “Canada” even existed. Many First Nations traditions and practices, such as maple harvesting, are still very much alive today and part of the traditions we consider to be quintessentially Canadian.

As part of growing up or living in Southern Ontario, most of us enjoy, or have enjoyed at some point in our lives, the opportunity to walk or even ride on a horse drawn-sleigh through a snowy woodlot in late winter, observing the spiles and buckets (or today, the acres of tubes!) hanging from trees, collecting maple sap.  An isolated cabin, wood smoke billowing from the chimney and smelling of sweet, caramelised syrup is the highlight of our tour (along with the pancakes!). Here sap is boiled in metal kettles or large, flat pans, reducing the liquid after many, many hours to the sweet, sticky, sugary treat that we all know and love. END_OF_DOCUMENT_TOKEN_TO_BE_REPLACED

The archaeology of Springbank Park and Victoria Park reveals a history that stretches over 12,000 years in London and includes indigenous, pioneer, and early military functions. With new development and reuse of our landscape, London’s history can be studied through excavated archaeological sites, archived stories, maps, and photographs.  As part of the Changing Landscapes exhibit at MOA, Springbank and Victoria Parks illustrate how our use of the land has changed over time.

Located in Byron, Ontario, Springbank Park is a multi-use park consisting of gardens, nature trails, bicycle paths, and grassed and natural areas along the Thames River. Springbank Park is part of the Springbank Cultural Heritage Landscape, and is highly valued by Londoners since its history and memories contribute to the community’s sense of identity and rich cultural fabric. Through historical research and archaeological findings, we can piece together the history of Springbank Park and its changing landscape. END_OF_DOCUMENT_TOKEN_TO_BE_REPLACED

Imagine you are next up at bat in the baseball diamond in Kensal Park. Did you know you are also standing on the remains of a 15th century Iroquoian village officially known as the Norton Site?

The Norton site was brought to the attention of Canadian archaeologist William Wintemberg in the early 1920’s when he was conducting extensive surveys at the Lawson Site. Although he mentions this discovery in his report of the Lawson excavations, no fieldwork was attempted at the location. At the time, the Norton family had been continually farming the adjacent land since the 1800’s and had recently acquired the land where the site is located.

The site was later rediscovered in 1987 in connection with a proposed water main being built in the north end of the park. The survey, conducted by Archaeological Services Inc. from Toronto, recovered a sample of artifacts that were similar in time to that of the Lawson Site. Further investigation revealed nine longhouses, a palisade, and one midden dating 1400-1450AD. In addition to flaked stone projectile points, bifaces, ceramics, and groundstone tools, worked bone items such as awls, beads, and a perforated antler object were recovered. Based on the evidence, the people living on site are identified as Ancestral Neutral.