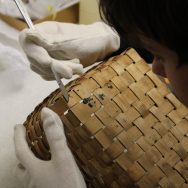 A Journey in Conservation: Basketry

Many objects in a museum collection require conservation treatment to extend their longevity, and First Nations basketry is no exception. Treating baskets requires multiple steps, but the general philosophy is simple: reduce the effects of damage in a controlled, documented, and reversible way.

The first step of conversation is documentation. Once this is complete, it is time to treat the basket. Conservators consider a lot during the treatment of an object including fragility, materials, and the object’s continuing health. The first round of cleaning is usually ‘dry’ cleaning. This includes brushing surface dust and debris from the object, as well as using cosmetic sponges to remove adhered dirt or accretions from the surface. Dry cleaning is an effective way to gently remove most of the dirt and dust from an object without being aggressive or invasive (because causing extra damage to the object only means more work later). In my experience with the basketry collection at the MOA, most require dry cleaning only. END_OF_DOCUMENT_TOKEN_TO_BE_REPLACED

We asked our Curator, Nicole Aszalos, to comment on this Guardian Article and share her Museum Curator’s secrets.

The Secrets of the Museum Curators from The Guardian is a well written article, with some of England’s top flight curators sharing thoughts on their careers. Although the article is not an in-depth discussion of the curatorial field, it does provide some effective and honest career insights for the aspiring curator. In the short article the curators also try to solve some misconceptions commonly associated with the profession.

Often when I say I am a curator, responses run along the lines of ‘Oh that’s interesting.. .What is that?” Now when we compound that on the fact that I am a curator at an archaeology museum, it can make for some interesting conversations due to the uniqueness of the position. The most common misconception about a curator’s role is that the majority of your time is spent doing exhibit design and selecting objects to make a gallery look pretty. Realistically, that is maybe 25 percent of the job. Curators are the keepers of the museum’s collection. This means we research, catalogue, preserve, conserve, and house museum objects for current and future generations. We maintain the gallery AND collection space and coordinate interns and volunteers. In actuality, it is a lot more behind the scenes than many people realise (editor’s note: imagine an iceberg. What the public gets to see in a museum is only the tip, above the water). END_OF_DOCUMENT_TOKEN_TO_BE_REPLACED

What’s in a Collection?

The recent discovery of Beatrix Potter’s Kitty in Boots in the Victoria & Albert Museum’s Beatrix Potter archive highlights the tremendous challenge museums can face in managing their collection and the information about them. With often thousands of objects and documents held in trust within museum collections the task of knowing not only what’s in the boxes but where in the museum things are located often falls to a select few people.

Museums hold their collections in trust for the public, and that responsibility includes not only caring for the collection but making the information and knowledge about it accessible.  Having worked with and for museums for over 15 years, I’ve seen examples of extraordinary collections management processes as well as “We don’t know what we’ll do if (fill in name) retires.  They’re the only person who knows where everything is.” END_OF_DOCUMENT_TOKEN_TO_BE_REPLACED

This summer, MOA’s curatorial team began its next big project to repack ethnographic artefacts and maps in our collection storage area. Thanks to a grant from the London Community Foundation, MOA was able to purchase archival quality storage materials which will allow us to preserve our remarkable collection for many more generations to come. While it sounds like an easy project, repacking artifacts isn’t as simple as taking things out of one box and putting them in another.  So how are we going about this?

MOA’s ethnographic and map collection consists of more than 3000 objects.  Due to the size of this project, the curatorial team used this opportunity to inventory the entire collection by going through each box one by one.  For every object found in a box, the curatorial team updated its catalogue record, location, condition report, and took digital pictures.  After a box was complete, all objects were re-wrapped in acid free tissue with a new object barcode placed on the tissue surrounding each object. END_OF_DOCUMENT_TOKEN_TO_BE_REPLACED

Emergency Treatment for Your Collectibles

Collections: Emergency Treatments for your Collectables

If we could prevent disasters, we would never have to worry about the safety and housing of our collection. In reality, disasters are unexpected and can cause irreversible damage to some of our most precious objects (take a look at the video of the sinkhole at the Corvette Museum). Some artifacts, fortunately, can be salvaged bythe work of experts. A local example was the 2004 flood in Peterborough, Ontario in which 1 meter of water seeped into the vault of the Peterborough Centennial Museum Association (PCMA), affecting many of the Roy Studio photographic materials. (You can read about the restoration initiative here.) END_OF_DOCUMENT_TOKEN_TO_BE_REPLACED

The Origin of Meerschaum

Meerschaum, also known by its technical name sepiolite, is a hydrous magnesium silicate formed from the shells and bones of prehistoric sea creatures. Meerschaum originates in Turkey, and can vary in colour from white to light grey or even yellow. It is very porous and light, ranked as a 2 in hardness on the Mohs scale.  Meerschaum is mainly found in veins mined as deep as 400 feet below the surface but it can also naturally occur as lumps that look similar to sea foam floating atop the surface of the Black Sea.

Mainly used to create pipes, the first pipe recorded using meerschaum was created in 1723 by a shoemaker in Budapest. He discovered that meerschaum is highly absorbent and he repeatedly dosed it in water to make it more pliable while carving. The experiment proved successful, and the first meerschaum pipe was created. Currently, it is housed at the Hungarian National Museum in Budapest. END_OF_DOCUMENT_TOKEN_TO_BE_REPLACED

Although not exactly like pictures we encounter today, tintype photographs set the stage for photography in our era. Tintypes began in 1856 when an Ohio chemistry professor Hamilton Smith patented the tintype image. While not a new concept, the tintype was a combination of earlier experiments in imaging and existing commercial processes. Even though these photographs are known as a ‘tintype’, they are not actually made from tin. During their production in the 1800’s these pictures were were called ferrotype, in reference to the material they were created on; ferrous (AKA iron).

Before tintypes existed, the two main types of photographic images, the daguerreotype and the ambrotype, were created by treating glass with light sensitive collodin. END_OF_DOCUMENT_TOKEN_TO_BE_REPLACED

We’ve worked at MOA since May 2015 as curatorial interns. Both our duties involve collections, curatorial work, and research. We have been doing an inventory of the ethnographic collections and helping set up incoming exhibits. We’re working on reboxing and rehousing artifacts and re-configuring the storage room in order to better preserve the numerous items held here. (Erin:) I am currently working on the inventory of the ethnographic collection and I am starting the plans for re-configuring the storage room collections.  (Mary): I am concentrating on finding the best way to catalogue and digitize the archaeological artifacts and all of the associated material. END_OF_DOCUMENT_TOKEN_TO_BE_REPLACED

This year’s Valentine’s Day blog is about the archaeology behind Mrs. Agatha Christie, a famous crime novelist with a strong and loving connection to archaeology.

Agatha Christie was born September 15, 1890 in the UK. In 1928, a visit to the excavation site of Ur (modern Iraq) sparked her interest in archaeology. She writes, ‘The lure of the past came up to grab me. To see a dagger slowly appearing, with its gold glint, through the sand was romantic. The carefulness of lifting pots and objects from the soil filled me with a longing to be an archaeologist myself.’ – A. Christie, An Autobiography (London, 1981), p. 389

It was during this time that she met archaeologist Max Mallowan, whom she married in 1930. Max Mallowan (1904-1978) was first an assistant to Sir Leonard Woolley at Ur and later a field director in Western Asia. He is known for conducting further excavations of the Nimrud ivories of the Assyrian kingdom 900-612 BC between 1949 and 1963 END_OF_DOCUMENT_TOKEN_TO_BE_REPLACED

Battle of the Thames

The war of 1812 began for various reasons including numerous attempted invasions from Americans into Canada. The efforts from this war helped shape Canadian independence from the United States. First Nation participants and our founding fathers were able to fight off invading American troops and establish a sense of Canadian nationalism. Between 1812 and 1813, Chief Tecumseh brought together First Nation tribes from across both sides of the border to defend native lands.

I was inspired by MOA’s new exhibit on the Chippewa’s involvement in the war of 1812 so I traveled westward to the location of the Battle of the Thames just outside of Chatham Ontario. At the site, there is a plaque citing both the battle significance and the accomplishments of Chief Tecumseh.  I was inspired to learn more about the Battle of the Thames and the circumstances leading up to it in the war. END_OF_DOCUMENT_TOKEN_TO_BE_REPLACED