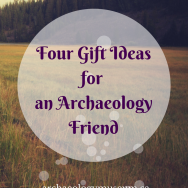 Every archaeologist knows that when you have a trowel you must hang on to it, because you never know when it will get mixed up with someone else’s onsite. We often mark our trowels with a symbol or name to break the cycle of confusion, but alas, trowels still go missing. Developed as a hobby by an archaeologist for other archaeologists, Hermit Woodworking designs custom trowels that you can buy online or custom order with specific colours or inlays (Harry Potter theme anyone?!)

END_OF_DOCUMENT_TOKEN_TO_BE_REPLACED

Archaeologists working in the 1960s, such as Lewis Binford, developed the theory of New Archaeology, which tries to understand the forces that cause cultural change. New Archaeology is also known as Processual Archaeology.

For example, Binford conducted an ethnographic study among the Nunamiut of Alaska. He lived with, ate with, and learned about the Nunamiut to better understand how hunter-gatherers lived in ancient France. Binford observed the waste materials created by knapping stone for tools, and found similar waste materials in the archaeological record. By linking modern understandings with archaeology, Binford learned more about past technologies and learned why stone fragments appear the way they do in the archaeological record.

Copper Manufacturing of the Archaic

Out of the known materials that were made by the First Nations, the copper materials that have been unearthed over the years are indeed fascinating. But where did these materials originate? How were these objects created? And what were copper objects used for? When journeying through the archaeology of these copper materials, even professionals in modern blacksmithing and Indiana Jones himself can only marvel at the brilliant copper manufacturing skills of the First Nations.

END_OF_DOCUMENT_TOKEN_TO_BE_REPLACED

International Archaeology Day: What You Need to Know

On October 21st, hundreds of organizations across the world will be holding workshops, fairs, and lectures for International Archaeology Day.

END_OF_DOCUMENT_TOKEN_TO_BE_REPLACED

It’s All Relative: Archaeology as an Early 20th Century Profession

Imagine that you are an archaeologist working shortly after the First World War. It’s your first excavation, and you have found small fragment of pottery. What questions would you ask?

Was one of your questions “how old is it”? This is a core question that can be tricky to answer. From 1914 to 1940, archaeologists refined stratigraphy, seriation, and typology in an effort to better understand the age of an object, and of the site as a whole. END_OF_DOCUMENT_TOKEN_TO_BE_REPLACED

How long have you worked at MOA?

What is your job title and what do you do?

My job title is “Curatorial Research and Exhibition Design Intern.” I research to develop blogs, exhibits, and internal documents for the museum to use.

How did you begin working at MOA, and what led you to this position? (Education, previous experience, passion, etc.)

I began interning at MOA for the Museum Management and Curatorship program at Fleming College. Before Fleming College, I graduated from the University of Waterloo majoring in Anthropology.

What drew you to this position? How did you hear about it? END_OF_DOCUMENT_TOKEN_TO_BE_REPLACED

MOA had the opportunity to sit down with Dr. Andrew Nelson, an Associate Professor in Anthropology at Western University, to discuss some of his more recent work, including his contribution to the Art Gallery of Ontario’s Small Wonders exhibition, which includes a Virtual Reality Medieval Prayer Bead, now available at MOA.

Andrew’s research interest are focused in two major subfields of anthropology: biological anthropology and archaeology. When he is not scanning artifacts in Sustainable Archaeology or working on the many research projects at Western University, Andrew can be found navigating the complexities of archaeological sites both local and abroad. END_OF_DOCUMENT_TOKEN_TO_BE_REPLACED

The Classificatory-Descriptive Period: Explorers and Romance

What do you think of when you think “archaeologist?” Don’t try to be too correct. Have some fun. When I think of an archaeologist I cannot help but imagine an Indiana Jones-like figure: someone exploring jungles and deserts in search of mysteries from the ancient world. This isn’t what archaeology is today, but it is part of the undeniable charm and romance of archaeology. END_OF_DOCUMENT_TOKEN_TO_BE_REPLACED

Remember that scene in Indiana Jones when you weren’t quite sure if Indy and Marion were going to escape from the snake filled temple in the Well of Souls? Well, there’s an archaeological site a little closer to home with the same secrets, surprises and religious past. While a visit to the Colony of Avalon at Ferryland, Newfoundland, might be a little shorter on action than an Indiana Jones movie, it’s got excitement and interest of its own.

END_OF_DOCUMENT_TOKEN_TO_BE_REPLACED

When people think of archaeology, they often think of box office hits like Indiana Jones and Lara Croft: Tomb Raider. These movies suggest that archaeological “treasures” can only be discovered in faraway lands such as the pyramids of Peru or the tombs of Cambodia, when in fact archaeological artifacts can be found right outside your back door here in Ontario!

About an hour north of Toronto are a series of archaeological sites near Wilcox Lake, on the Oak Ridges Moraine, located in Richmond Hill, that span most of the human history of Ontario. The TRCA (Toronto and Region Conservation Authority) began initial excavation of the Lost Brant site in 1992 and intensive excavations took place from 1999 – 2002, uncovering almost 10, 000 artifacts, including chert points and pieces of ceramic vessels[1].